Snowbombing is a yearly ski, snowboard and music festival in Mayrhofen, Austria. I’ve been three times and everytime has been incredible. They always have a vast array of live acts and DJ’s, mostly British acts and often focussed around drum & bass and house music.

The festival is sold as a package tour so your ‘entrance’ ticket is included with the accommodation you book, and then you can add on extras like ski hire, ski pass etc as you please. It’s a very good system and works well to keep the overall cost low – with the cheapest package you can do your entire holiday, with transport and accomodation, for as little as £500.

The natural scenery of the area is really beautiful, and because it’s held towards the end of the season in April it can sometimes be have lovely warm, sunny days. Often you will see people ski or boarding in just t-shirts and shorts, or even swimwear. 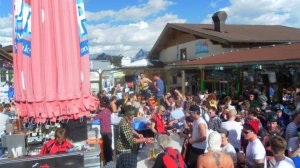 As well as down in the town, they also organize a few music stages up on the pistes too, with DJ’s providing the music for ski competitions and various funny events like trying to ski over a pool of water. They have prizes of cash and free drinks for competitors, and anyone can compete. I got €20 for best newbie as I tried to do a trick and failed spectacularly!

We would spend our days chilling on the mountain, drinking, dancing and occasionally doing a few runs or attempting the snowpark. At night everybody would drunkenly clamber into the lifts to heaed back down to the village, where we head off to one of the many venues after dropping off our snow gear back in the hostel. 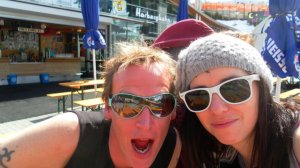 On Wednesdays they also do a big ‘street party’ in the centre of town with a stage and DJ’s such as Fat Boy Slim, Chase & Status or Gorgon City. The biggest act will usually play on the last day in the forest stage, and twice when I went it was The Prodigy, supported once by Beardyman.