After Brisbane I flew down to Sydney to spend a weekend there with my girlfriend, who’s friend Anabelle had been kind enough to let us crash at her place. On the first day we explored the city centre, the Opera house and walked over Syndey Harbour Bridge. Towards evening we went to a bar and had two beers and then for no reason they wouldn’t serve me anymore. It was very strange but we brushed it off and moved onto the next bar. Bizarrely in the next bar, after one beer they asked me to leave! Apparently they seemed to think I was drunk, although after three beers I couldn’t possibly be – so I can only guess it was my foreign accent? Sydney has very strict drinking laws, it’s illegal to get drunk anywhere… which seems to negate the point of bars? 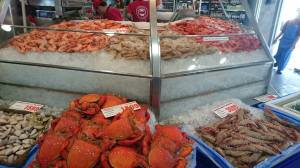 The following day we went to the Sydney Fish Market which is AMAZING! Pretty much every type of fish you can find, and we had some awesome deep friend soft-shell crap, calamari and various other things – including sushi and very affordable glasses of white wine. There were also some crazy big pelicans hanging about which were actually pretty scary.  That evening we went out for dinner with Annabelle and her friends and then tried to go to some bars but once again it was very difficult to get in anywhere or get served.  Strange place Sydney.

Day three we walked all the way down to Bondi Beach and then walked along the rocky coastline watching surfers and just chilling out and taking photos. It was kind of winter time though so it wasn’t warm enough to swim or suntan. 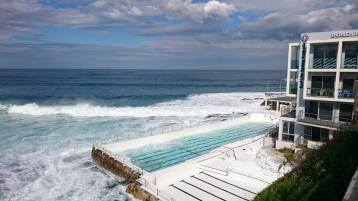 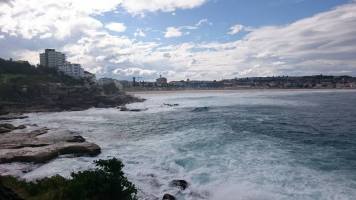 Then it was the weekend, and time to head off to PsyFari, an outdoor trance party in the Blue Mountains. Annabelle had some college or something to do in the morning and then picked us up in her car and we drove off on the four hour drive to the venue. We arrived quite late and so go into partying pretty quickly as we only had one night there. We got pretty wasted and I think Annabelle was on my shoulders at some point. We were supposed meet some other friends from London who we had seen earlier in the week but only managed to see them briefly in the morning before we had to head off.