New Years 2016 found me snowboarding in the small French alpine town of St Francois-Longchamp.  Unfortunately, snow conditions were not ideal, and we found ourselves spending the entire week boarding down the same one run.  Despite a small spattering of snow on the 3rd day, only one ski-lift remained open the entire week.  However, the braver amongst us took to the off-piste and managed to find a few nice patches of powder to keep us entertained.  At one point I boarded straight over a ravine hidden by packed snow and was very lucky not to land head first into a pile of rocks.

We also took advantage of the fair weather to hike up some of the surrounding mountains and got some lovely shots.  Since we all knew there wasn’t any excellent snow to wake up early for, we spent most nights partying until the wee hours.  After one particularly drunken night, I awoke to find my snowboard was not in the board room where I usually kept it.  A quick panicked run down to where we were drinking the night before revealed it had been saved by the bar owners, who kindly stored it safely overnight behind the bar in the hopes my hungover ass would come retrieve it!

While cooking dinner one night, Alex managed to dislodge the top of a wooden meat hammer while demonstrating his hammering skills, which then proceeded to fly across the room and hit me square in the mouth, splitting my lip and exploding pain across my face.  Luckily I didn’t lose any teeth, and Alex was kind enough to buy me a bottle of whiskey as an apology!  No hard feelings!

Despite the bad snow conditions and the snowpark being closed (!), I managed to get in a few jumps off the side of the piste and tighten up a few surface tricks on the board. One day we hiked up the opposite mountain and a few of our group, including the group leader, snowboarded down through very rough off-piste – over slush,  grass and rocks!   Luckily they were using free testing boards provided by a sponsor! 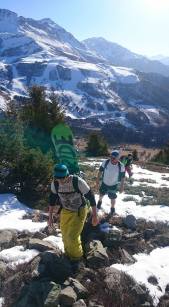 New Year’s Eve itself was the usual drunken debauchery. The resort even had a small outdoor party in the parking lot with DJ’s, fireworks and all.  We had a huge dinner with our tour group of about 30 guests and then watched the fireworks from the hotel balcony before heading down to the party for a bit.  After that, the three or four local bars continued the party until the early hours.  I vaguely remember something about jager-bombs and not much else after that. 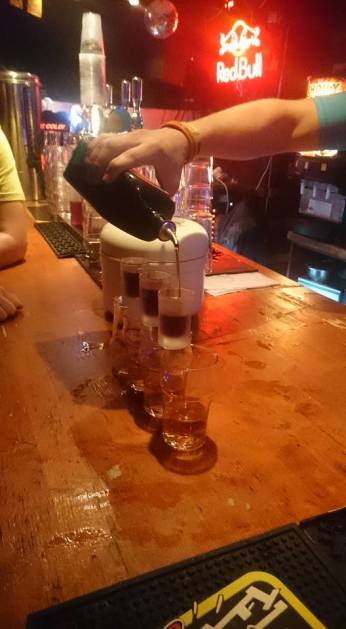 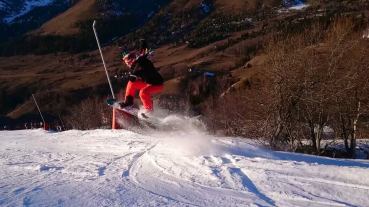