This was one helluva party!  My friends Mike and Lizzie organised a beach house for us in the festival camp grounds, which was a bit more expensive than camping but so worth it.  Proper beds, a full kitchen, fridge (cold beer!) and shower with hot water.  Plus an awesome balcony which we spent a lot of time on watching and laughing at all the drunk people coming past.

Stupidly I was partying the night before in London at Notting Hill Carnival, so I slept through my alarm and missed my flight, forcing me to buy another one at the last minute for £150.  That was an expensive lesson.  It also meant I was too late to catch my connecting coach from Venice in Italy to Pula in Croatia where the festival was.  I had to do a mad rush of getting a bus from the airport to the local train station, which then took me as far as the Slovenian border, and from there I had to catch another coach to Pula.  Luckily it all worked out and I finally made it!

The first night the main festival hadn’t started yet, but there was a small independent dancefloor setup just outside the festival grounds next to a little bar, so me, Mike and Lizzy and another one of crew from Joburg, Cimone, spent most of the night there dancing and lying on the beach until the sun came up. We met this very energetic Colombian who kept us going all night, and for most of the festival really. The next day the final member of our crew, Louella, arrived, and the party started in earnest.  We spent most of the morning chilling by the beach until the real music started and then we went to explore the many dancefloors – about 14 in total!  I can’t remember much of that night, but I remember there was an awesome dancefloor called the Moat which had the heaviest bass I’ve ever heard.

The next day was the Gentlemen’s Dub Club boat party.  It was in the afternoon and I was pretty drunk by that point so I spent most of the time trying to pick up this British/Indian girl who I thought was the cutest thing I’d ever seen, but she was having none of it.  I think she was about 22, haha.  Probably thought I was some old dude working at the festival or something.  Actually the average age of the entire festival seemed to be about 22!  Being mostly bass music I guess it appeals to a younger crowd.  Anyway the boat party was still awesome, mostly because I was wearing a purple

unicorn horn the entire time.  I’m not sure who that guy in the picture with me is??

We headed back to the beach house after the boat party and just massively chilled out on our porch until much later that night, then headed back to the main festival area to dance until sunrise.  At some point we found ourselves sitting on the pier listening to power ballads on my phone and staring out over the ocean.  I’m not sure anybody else liked the power ballads, but I was having the time of my life. 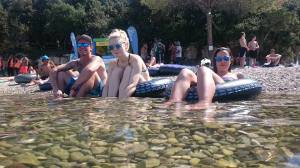 The next day we had another boat party, All Trap Music.  I’d never really been into Trap music so I wasn’t sure about it, but it turned out to be the best party of the festvial!  We had spent the morning getting sufficiently wasted on the beach, so by the time 4pm came and we had to go to the boat, Mike was too hungover and decided to skip it and sleep instead.  Sorry for him, he missed out!  Me, Lizzy and Cimone headed to the boat, stumbled onboard and pretty much just danced for the entire trip, while watching some of the most beautiful sunsets I’ve ever seen. 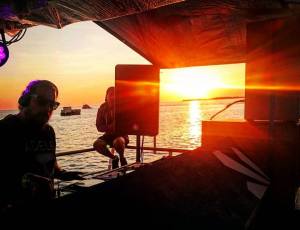 All Trap Music is a label started by Jikay, who I hadn’t heard before, but he was great.  He also had Massappeals and the legendary Lex Luger with him, so it was pretty much solid good music for four hours.  Needless to say, I left that boat a Trap music convert.

I crashed out pretty hard after the boat party and some lovely person bought me a hamburger and fed it to me, I think it was Lizzy or Mike.  That saved me or I would have had an awful hangover later on.  That night followed a similar theme as before, moving from dancefloor to dancefloor, chasing the good tunes.  I’m sure there were many individual moments of hilarity and notable occurances,but for some reason I struggle to remember things after dark. I think I’m more of a day party person.  I do remember watching Noisia around midnight and then heading to bed because I was exhausted.

We were all feeling a bit rough around the edges today after three days solid partying, so we took it easy and had a nice lunch in a proper restaurant overlooking the ocean.  Then we just lazed on the beach and took turns attempting a floating, inflatable obstacle course they had setup in the sea.  You were supposed to pay to use it though, so this guy would occasional come across on a little kayak and kick us off.  He had his work cut out for him! 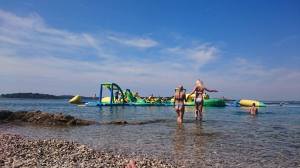 Then we headed off to another boat party, and to meet a friend of one of Louella’s friends, Andy, who just happened to be in the town of Pula for the weekend and decided to come to the festival – even though he didn’t know anybody else there!

We found him and tried to enjoy the boat party but everyone was feeling a bit worse for wear so we just sat around on the lower deck drinking and chatting.  I danced a bit though and quite enjoyed watching the lights from the shore reflecting off the water, as it was a night time party.  It was pretty heavy rap and hip-hop music though so maybe not the best for a bunch of hungover people.  Afterwards at about 11pm we returned to the main festival and attempted to party, but everybody kept fading off like little delicate leaves in autumn, until only me and Andy were left. We found Mandy and she got us in a really good mood so we decided to party with her.   We held the fort and kept jamming right through until about 7am the next day when they turned off the music.  Then we walked around the bay and watched the sunrise while some crazy people went swimming naked in the freezing water.

By this point everybody was done with partying, so we just chilled all day by the awesome Beach Party dancefloor.  I was also severly broke by this point so I was happy to just chill.  Mike decided it was a good idea to finish all the whiskey by himself and try hula-hoop security guards with an inflatable tube, which very almost got us kicked out and/or arrested.  After six days of dealing with drunken foreigners I can understand the Croatian security guards 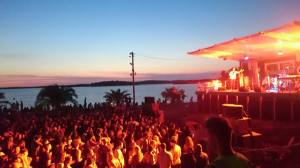 We did attempt to go to party a bit that night but spent the majority of the time trying to keep Mike on his feet.  Fortunately I made friends with two Slovenian girls so when Mike and Lizzie headed back to the house I carried on partying with them.  They had just come for the weekend and were also a bit older than the average crowd, so were happy to meet someone more their age.  When it started raining around 2am I was hoping they would want to retire back to their campsite, but they just kept going!  Eventually I gave up at about 4am and headed back to the house because I had to be up at 8am to catch my coach back to Venice.  I did add them on facebook though and they invited me to come visit them in Slovenia, which I plan to do as I’ve never been there before. 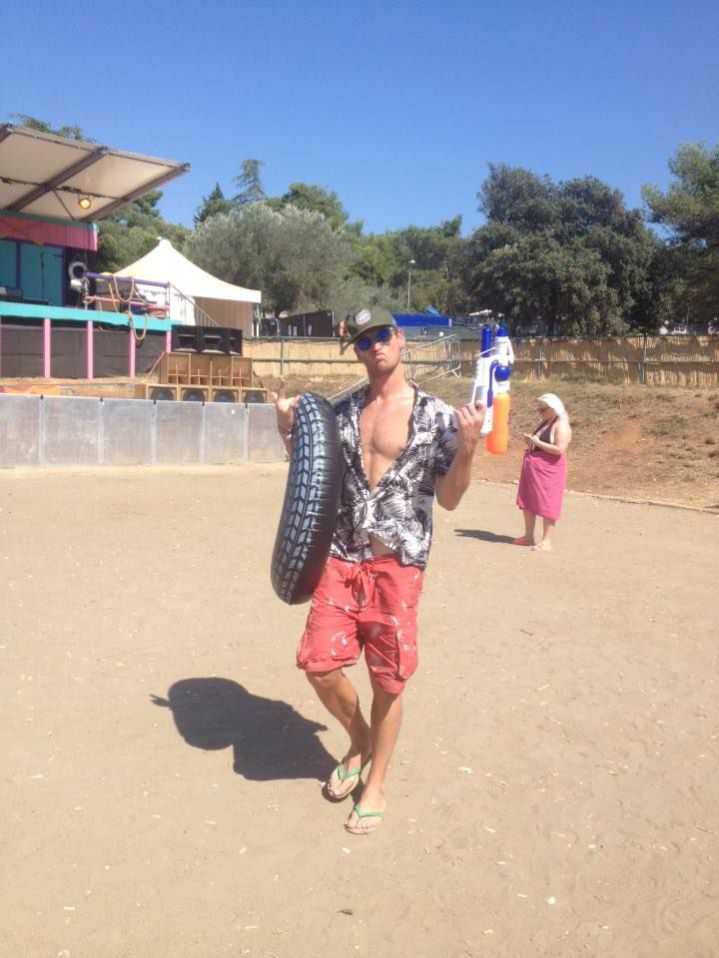 Once again I slept through my alarm and very almost missed my coach!  This would have been a serious problem, as I literally had no money left for another coach and/or flight!  Luckily I made it just in time and enjoyed a long, very hungover three hour journey back to the airport…. good times 🙂

Outlook is an incredible festival, in one of the most beautiful locations you can imagine, but I think it’s become somewhat over-commercialised recently and is populated almost entirely by very young, drunk, British students.  While it was still a huge amount of fun and I would definitly go again, I think it would be massively improved by an older and more diverse crowd.  I believe there are other festivals in this same location, so I might check those out in future to see the difference. 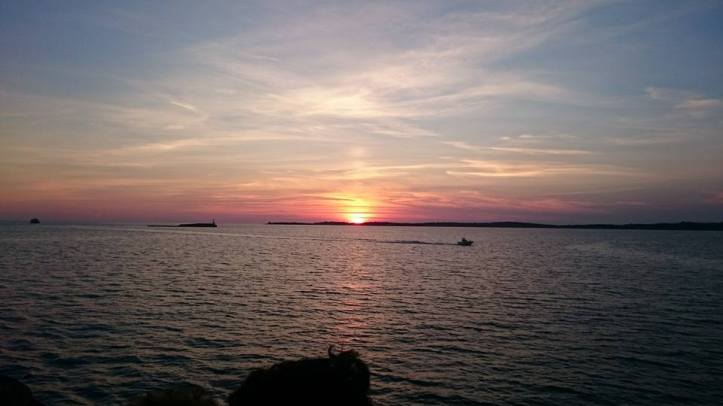